We had been talking about a “mom” that had started an interest in Pinterest. As the conversation continued on I became more and more agitated with the whole thing seeming as if this “mom” was a better mom because of her new interest and execution in Pinterest.

I went to bed with this cloud of anger surrounding my head as I drifted off to sleep in a bed of self-doubt of if I was an “okay mom” because of my unfinished pins that filled my Pinterest boards.

Using Pinterest Doesn’t Make You a Mom! (I told myself).

That night I didn’t dream of ways to teach my kids the different kinds of clouds through the use of cotton balls or the endless ways to cook chicken in a crock-pot or the 50 ways to improve my wardrobe by wearing an infinity scarf 12 different ways but I did wake-up thinking of that “better mom” and if I was somehow failing my duties as a mom, wife and woman through my use of Pinterest.

Then I remembered … I used to be a Pinterest mom. I used to be that idea of a “better mom”. For my eldest son’s first birthday I not only had a monkey head cake and 40 smaller monkey head cupcakes that I baked from scratch but I also decorated and dedicated a whole first floor and snacks to a blue and monkey head theme. I had stayed up until 1 am doing so. HOWEVER, I only had one child at the time. I spent my days attending play dates where we drank coffee and our children either sat on our laps or rolled over one another as they grabbed at toys and coffee tables with their chubby little hands.  But little did I know …

When my twins turned one I had a whole party and first floor dedicated and decorated to a snowman theme. A hot chocolate bar, not one but two cakes in the shape of snow-people and an endless array of winter inspired snacks and games all from Pinterest. But at that point in my life I had twins that were not yet walking and talking and were also napping twice a day. I had a “me” routine and no one in extracurricular activities. Now life is a little different but still …

Now I’m lucky if I can keep all the kids interested in the same activity at once. I’m lucky if I can get through Hobby Lobby or the Dollar Store without a child pushing another causing World War III in aisle 4. I’m lucky to find an ingredient and meal that all five of us can agree on. Nowadays I’m more about enhancing the woman I am rather than the four corners of my child’s room. I spend my free time devising a schedule and speakers for MOPS. I’ve concluded that birthdays are more about the memories made rather than the birthday cake they smashed and the backdrop to their holiday pictures. Halloween is more about getting elbow deep in pumpkin goop rather than worrying about how each of our costumes corresponds to each of the family members.

Though Pinterest may not make us better mothers, there is a phase in motherhood where it is this entry into a world that is shiny, sparkly and new. A time when your days are dedicated to celebrating craftiness and little chubby hand-prints. A time that is simpler and calmer.

Using Pinterest Doesn’t Make You a Mom … but it does make those early years fun.

I still use Pinterest and pin activities and recipes that I will probably never get around to doing. But now my boards are a little different.  I am pinning more about my interests rather than the interest of my children. I’m pinning about renovating kitchens and ideas behind future blog posts. My Pinterest emails are more about yoga and Paleo recipes instead of sensory bins and DIY teething cookies. Pinterest has become a window into the phases of our lives. The interests and hobbies of our seasons and the years of not only our children growing older but also ourselves growing older and wiser. 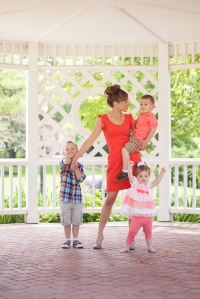 One thought on “Using Pinterest Doesn’t Make You a Mom!”