(Guns Blazing over dirty socks left next to the bed.)

(Guns Blazing over used tea bags left in the sink.)

Believe me when I say that after almost 7 years of marriage we have had our ups and downs. Especially when you throw in not one but three moves in 3 years and not one but three babies in three years. Factors of life throw some flames into fires that shouldn’t even be given the time of day. But marriage and life will do that, create moments in time that you felt so strongly about but look back on wondering why the hell you were so mad in the first place.

(Guns Blazing over a nap taken by one parent when the whole family had the flu.)

But back to my original point, our fights have been petty. Nothing involved has been illness, infidelity, money problems or death. We’ve been lucky. Our fights have been about chores, naps, sex, crabby attitudes, our kids or just out of lack of sleep. Though he has pushed my buttons he has never laid a hand on me. Though I’ve wanted to take a sledgehammer to his Smartphone to prove my point on “screen time” I just did my best at snarky remarks and the silent treatment. Though we’ve gone to bed mad or went into another room to cool off never have we actually shut the door on our marriage.

Marriage is tough, some are tougher than others. Marriage isn’t perfect, mine is far from it but I really lucked out.

When I envisioned marriage I didn’t think that would include an argument about doing the dishes that would get so heated I would leave the next day to just make a point. The picture below is priceless because about 45 minutes before this picture was taken we were in an all out shouting match. I couldn’t even tell you the exact details of how it started or who won but i know there were words said and tears shed on a day that was supposed to be happy. But now I look at the photos from this day and laugh because we were so pissed off at one another we couldn’t even see straight as we sat in church with our youngest two being baptized. When our twins were just a few months old my better half got so upset with me over a misunderstanding that he didn’t talk to me for almost two days, now I make fun of him for those two days. These petty fights won’t be our last. I’ll bet my marriage on it that the days and years of the future will be filled with petty fights with guns blazing which means that we will also never be short on laughter.

(Guns Blazing because you actually married someone who had the balls to say you’re wrong.) 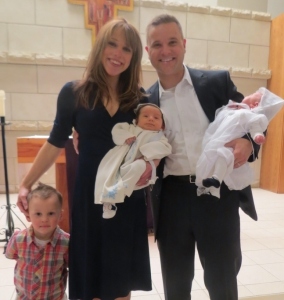