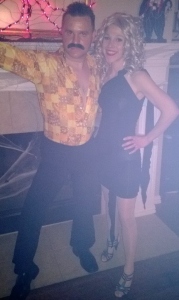 My husband is dating, living, sleeping, and having sex with a woman that is organized, eats kale and no grains, spends her free time cleaning or planning trips to a foodie restaurant, spends less than 30 minutes out of the 24 hours in a day on her appearance, falls asleep each night at 10 pm and believes yoga and coconut oil to be the remedies for all aliments and problems in the world. I like this woman very much but he didn’t vow to stand by her side through all of eternity.

My husband married ME 6 years ago. He married Brooke Plesek, who was disorganized, drank too much coffee/alcohol and ate too little, spent weekends being unproductive in bed while watching crappy television, stayed up late for no good reason, spent two hours each day on appearance and woke up each morning to hit a cardio machine at 5 am. The woman he is seeing is not the woman he married.

When I married my husband six years ago his favorite meal was one on the McDonald’s value menu, spent Sundays watching sports, lived in jeans and sweatshirts, thought laughing at videos on break.com to be a hobby, found sleep to be the answer to everything and had a carefree attitude about life in general. I married Erik Halperin.

I am not a cheater.

The man I am dating, living, sleeping, and having sex with is a man who’s favorite meal is one on the McDonald’s value menu, spends Sundays watching sports, lives in jeans and sweatshirts, thinks laughing at videos on break.com to be a hobby, finds sleep to be the answer to everything and has a carefree attitude about life in general.  I am seeing Erik Halperin.

My husband the cheater is disorganized, hates kale and might as well bathe in grains, spends his free time avoiding cleaning, takes 30 minute showers, falls asleep at the drop of a hat and believes yoga and coconut oil to be tools of black magic and Voo-Doo. So what is he doing with this health crazed tramp who thinks having a lazy Sunday is antiquing in a quaint neighborhood gem?? It’s because he is married to her …. that tramp IS ME.

From what research gathers, the above observations would mean we have grown apart and our marriage is doomed. But I took a backwards approach to analyzing what attracted me to my husband in the first place, which today are attributes I can find incredibly annoying at times. Here is what I found …

What if rather than making love to a Big Mac he ate green foods and swore off sugar? Instead of watching sports all day on Sunday he cleaned baseboards in the kitchen and completed the latest DIY project on Pinterest? Or rubbed dry shampoo into his hair to make it one more day without washing it? Instead of sleeping he stayed up to finish the last few pages of a book he found terribly written? What if rather than having a carefree attitude about the small things in life he tortured himself over the thought of everything from the plastic our food comes in to what type of husband our little girl will marry in 25 years? And finally, what if he turned into a bat-shit crazy bitch if he didn’t fit in yoga into his morning routine? I would probably leave him 🙂

4 thoughts on “My Husband is a Cheater, but I didn’t leave him.”