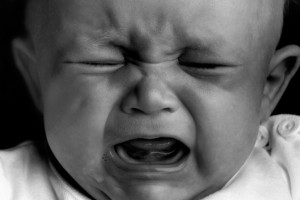 As promised in “So This is Parenthood?!?”:

While pregnant my OB never told me about meltdowns.

No one gave a solution or guide to meltdowns as a baby shower gift.

My mom never relayed stories of my own childhood meltdowns as she squealed in delight over being a grandma.

There are no National Geographic specials titled Children Meltdowns.

Never brought up and never addressed as my husband and I giggled with glee about the new baby that would come to be.

Funny how no one warned me of these meltdowns that have come to occupy my days and nights.

The meltdowns of children do not discriminate. They happen at home and in public. Morning and night. One minute happy, next moment end of the world.

Since no one warned me, I warn all of you that have yet to be blessed with a child, the meltdowns will come, some big, some small and some repetitive. Nothing will prepare you, but at least you have been warned. All I can do is wish you luck and offer the focusing thought that “IT’S ALL A PHASE” … a phase that will last a minimum of 18 years but eventually the meltdowns will cease and peace will come again. Until then, here are some of the meltdowns I’ve dealt with in the last 72 hours, hopefully they provide an insight into what you will come to experience when that tiny human you are growing becomes a bundle of emotions and a ticking meltdown bomb.

*My eldest broke down because there was a speck of visible butter on his noodles – “WHAT IS THAT WHITE THING?!??”

*Travis flipped his lid because I made the mistake of cutting up his waffle rather than leaving it whole.

*Hailey screamed at the top of her lungs and slammed her fists on the table because she wanted a spork and not a spoon.

*Braxton began to cry because I told him that it wasn’t spring and that it was still winter.

*Travis insists on having the “to-go” sippy cups and will lay on the ground in an all out meltdown if he is offered another cup.

*Hailey cried and stomped her feet when she realized that all the chairs were occupied at the kitchen table … she then proceeded to pull her twin brother by the back of the shirt and off a chair to gain a seat.

*Braxton huffed and puffed until he was brought to tears because the heating vent was blowing his curtains while he laid in bed.

*It was the end of the world for Travis when I gave him the blue crayon rather than green crayon I was using.

*When I asked Brax to pick up before bed last night he laid on the ground as if shot and moaned “WHY DO I ALWAYS HAVE TO CLEANUP?!”

*Hailey lost it when even though she had the exact replica of the Crayola No Mess Tablet in her hands, Travis picked his up off the ground across the room from her.

*Brax freaked out the other morning when he realized that Travis was using the 101 Dalmatian fork. This then lead into including that he had made the mistake of asking for cereal instead of eggs and no longer wanted Honey Nut Cheerios but wanted eggs AND to use the 101 Dalmatian fork.   When Brax tried to take the fork from Travis, Big T grabbed at Brax’s face while screaming.

*Travis went ape shit when I wouldn’t let him take his stuffed dog into the bath with him.

*As I write this Hailey broke down into tears when I told her that she couldn’t have a marker.

Basically my children think this is an unfair world.